How A 19th Century Coffee Farm Is More Successful Than Ever 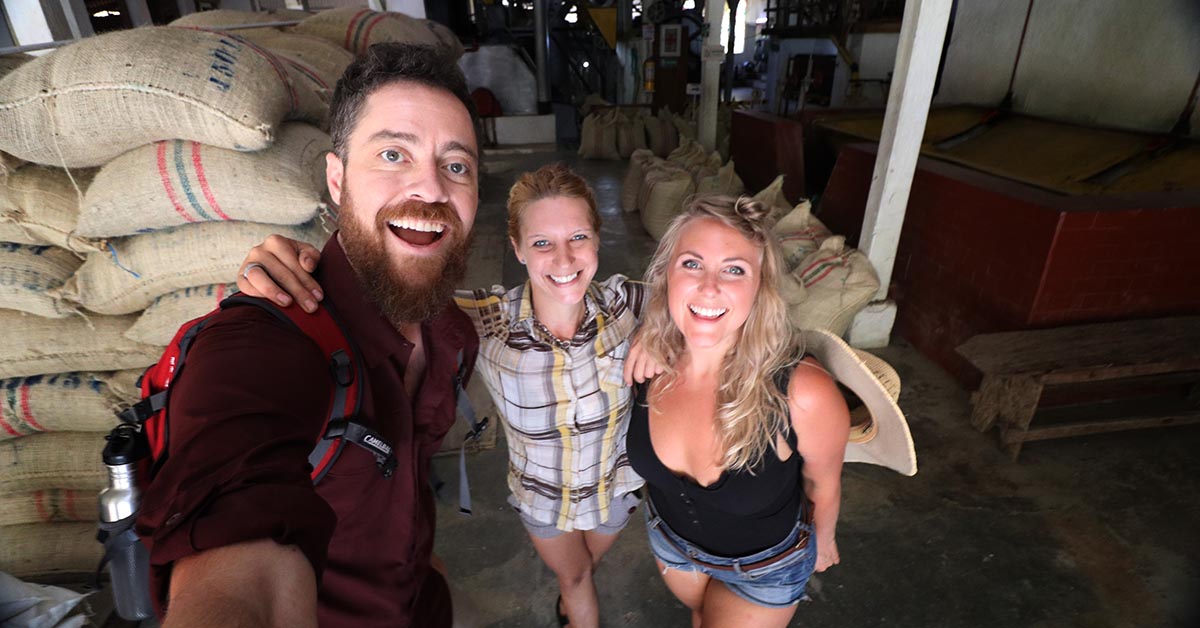 How is a coffee plantation, built in 1892, thriving more than ever today…

Tucked away in the moody jungle of the Sierra Nevada Mountain Range, La Victoria coffee farm is one of the biggest & oldest coffee producers in northern Colombia, founded by a British couple. 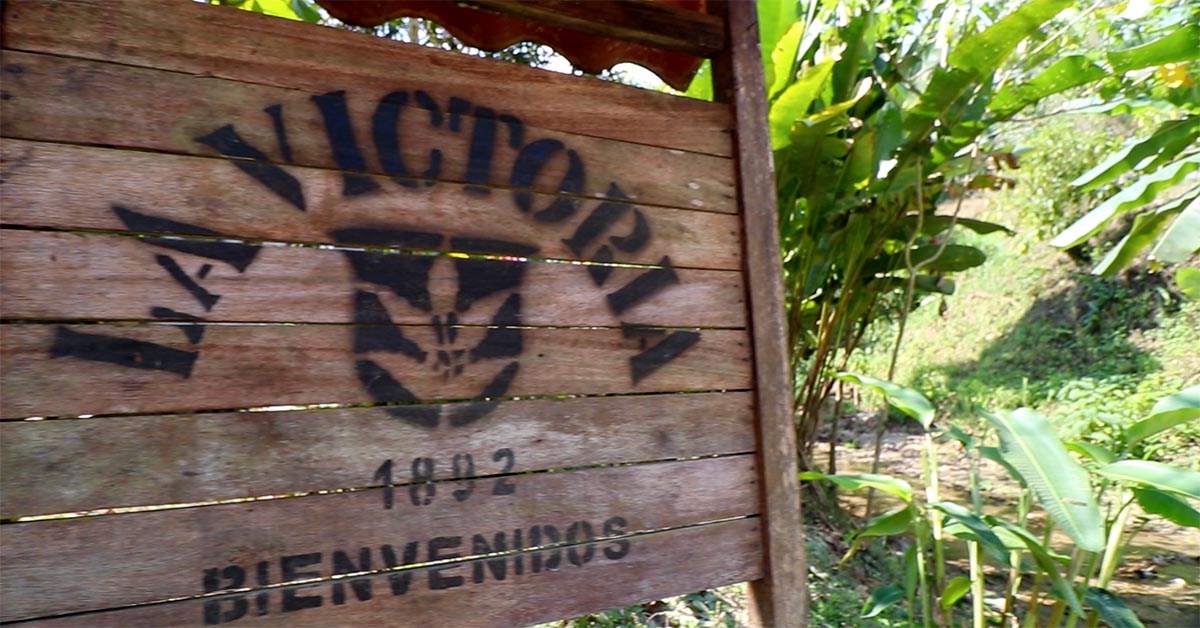 Not only has this old coffee plantation in Minca Colombia passed the test of time, it has survived fierce mother nature. Between the scorching hot weather on the equator, and wild heavy rains this farm continues to be passed through the generations. Before the Brits built the coffee plantation, this was the land of indigenous communities and the ancient Tayrona civilization.

A prime example of a brilliant business model that gives back… This old coffee plantation has been fully sustainable & self-sufficient since the early days, when it was built. We will get back to that in a moment, but first let’s talk about why it’s so trendy, and another reason why it’s so popular with travelers like us. We were actually recommended to take the tour by our Airbnb host, and ended up having a super informative guide named Jasmin. (Watch the coffee farm tour video, and see this hidden gem in the jungle.) 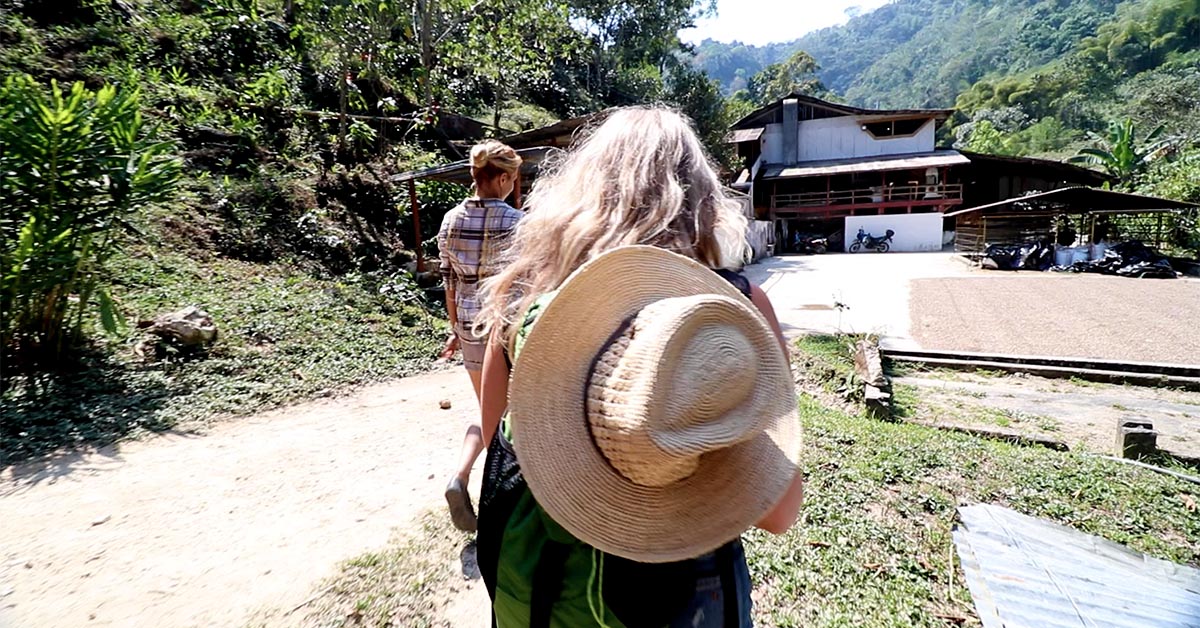 Well, La Victoria is proud to say that they are herbicide & pesticide-free, and they’ve been an organic farm long before “organic” was trendy. They grow a huge variety of tropical fruits, vegetables, coca leaves, and even harvest organic honey. They have a lot more to offer then just organic arabica coffee.

Multiple streams of income, created & supported by the diverse ecosystem…

Speaking of all the different things La Victoria offers because of its bountiful ecosystem… This incredible jewel in the jungle has also attracted a wave of tourism. Which has quite honestly been a surprise to the surrounding Minca community, but also an economic blessing. In all truth, it’s a double edged sword.

Four years ago Minca was still being affected by the armed conflict, just like the rest of Colombia… This community was just getting back their resources, and settling into a normal life. Two years ago, a road finally connected Minca to the oldest city in Colombia, Santa Marta. Guess who found Minca, and started pouring in… Tourists. 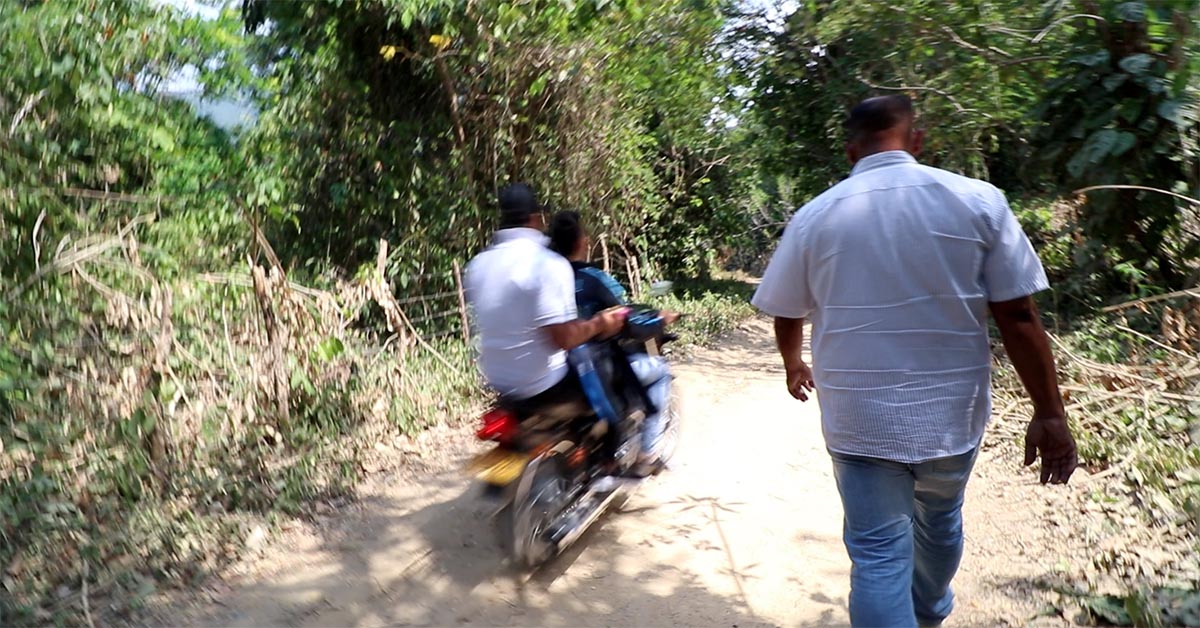 It seems that La Victoria has handled the sudden demand rather well, and has opened up a lot of opportunity to employ locals to help them out. They went from producing coffee to offering tours to people who were just showing up at their coffee plantation. Tourism has become a wonderful source of extra income, as it sits on a 1235 acre nature reserve. Bird watchers & nature lovers have been highly attracted to the Minca area, and La Victoria is definitely leveraging what they have to offer, while preserving their ecosystem.

After a full day of birdwatching, and enjoying nature… Nevada Brewery who now lives on La Victoria’s property offers a variety of beers to locals & tourists as well. So everyone benefits.

If it’s not broke don’t fix it…

We mentioned before that La Victoria is 100% self-sufficient, and it has been since the beginning. That’s because it had no choice, as it was not only high up in the mountains of the Sierra Nevada, but also in the midst of a very dense, impassable jungle.

Brilliantly enough, back when they built La Victoria Coffee Farm, one of the first things they did was hire The Pelton Water Wheel Company to install a hydro wheel to power the plantation. 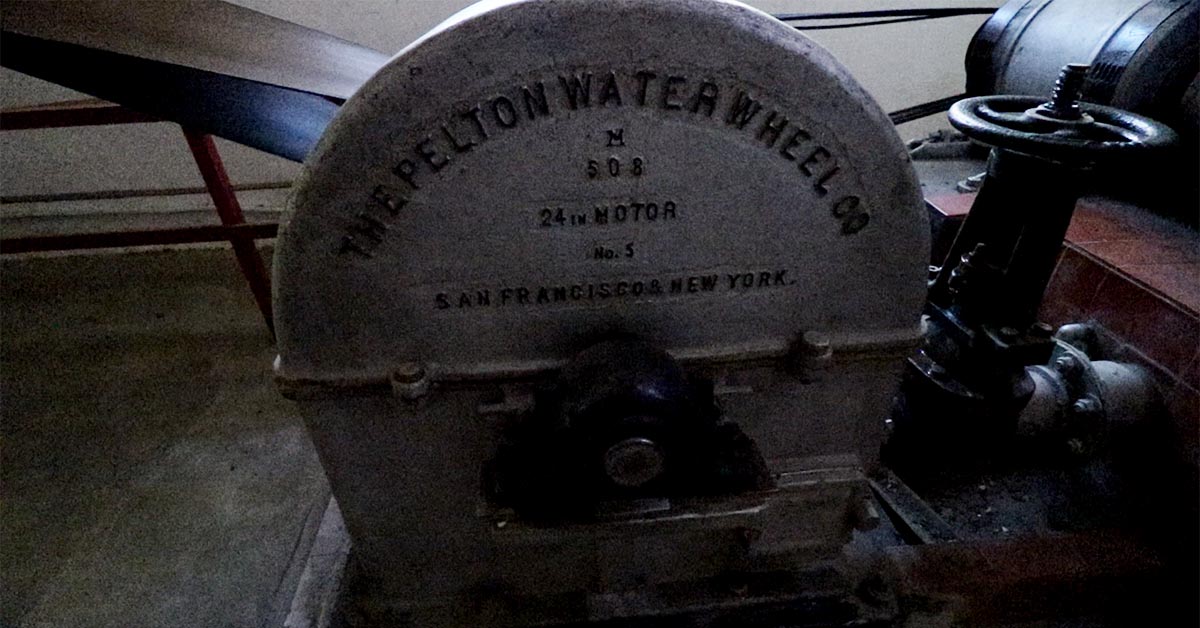 Several fresh water springs feed 3 large holding tanks, up in the mountains, and are piped down to the water wheel to power the plantation. Then the water is directed back into the stream. Not only has this system provided electricity to the coffee plantation since the beginning, but it also provides free power to 20 homes in Minca, a hostel, and the Nevada Brewery. Talk about giving back to the community!

We were thrilled to see La Vitoria still using several original machines in the coffee plantation that have passed the test of time, and were built sturdier than most modern machines. It is certainly nice to see this 19th century company leaving such a small impact on the environment, but such a big impact on their community.

How can you take a leaf out of this coffee farms book, and apply it in your business…

Imagine your business 126 years into the future…

A lot of the people who have come to us wanting to build a business online want to BE a success overnight. La Victoria only appeared to BE an overnight success because that’s when foreigners found out about it. The truth… It built a strong foundation years ago, based on beautiful morals & values. This is a company that has integrated & protected its environment since the 19th century. No wonder this coffee farm in the dense jungle is still thriving today! 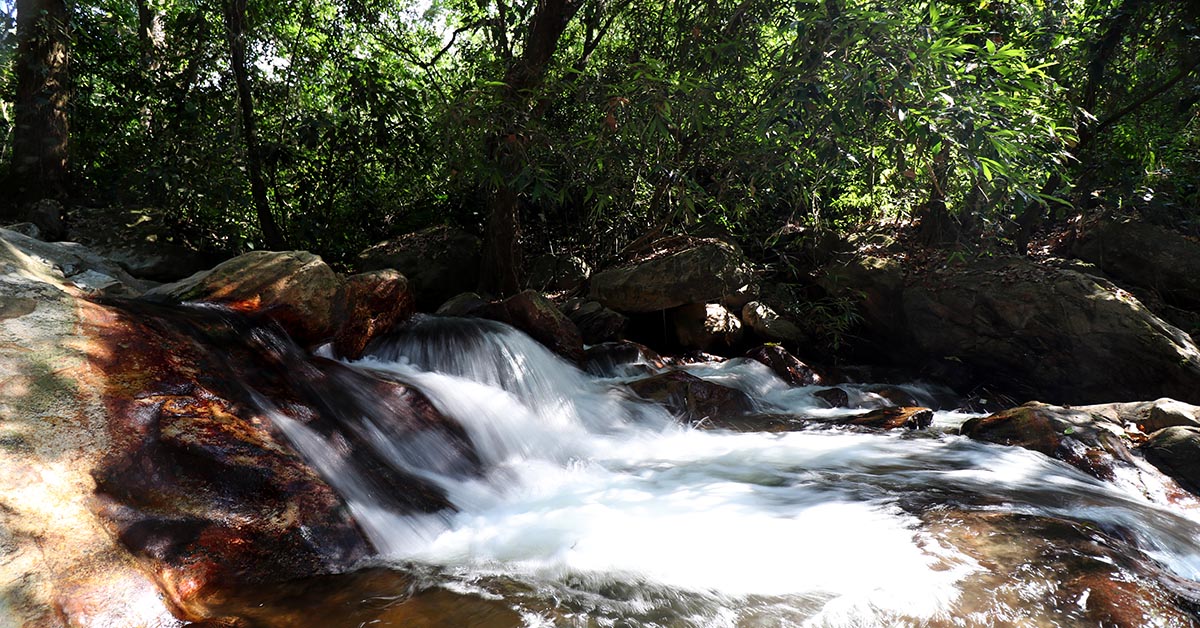 The most successful businesses are based on good values & service that help people solve a problem, fulfil a need, or desire. So think about your values as a person. What’s important to you? How could you help people? That is an awesome place start if you are just getting going with your online business, or if you are reworking your existing business.

Sure you can build a business on your own, but it can be lonely & not that fun at times. As you have read above, La Victoria wouldn’t be here today if it hadn’t contributed, and been supported by the Minca community.

The BE Adventure Partners Exclusive Tribe For Entrepreneurs is here for you while you build your business. Grab your membership today, and get the support you need to build a thriving business online. 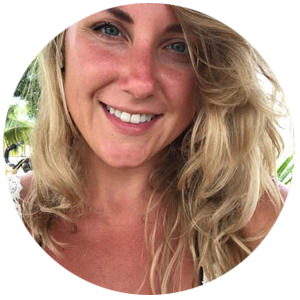 Love within, love around... Adventure On!
- Erin Nicole Bick

Check out our must read articles about Starting Online Business 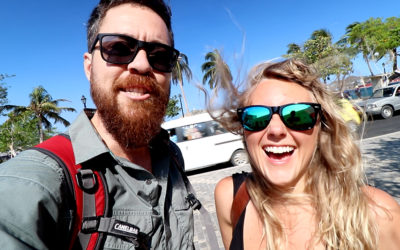 How To Film An Interesting High Quality eCourse In The Wind

People are searching for good information these days, so when you film your eCourse it’s gotta be...

END_OF_DOCUMENT_TOKEN_TO_BE_REPLACED 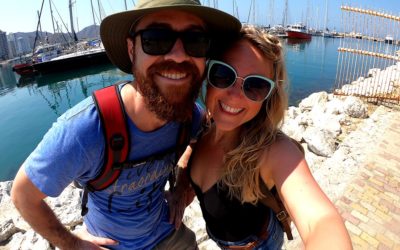 Entrepreneurship On The Rise In Santa Marta Colombia

Around every corner you turn, it’s evident that entrepreneurship is on the rise in Santa Marta,...

END_OF_DOCUMENT_TOKEN_TO_BE_REPLACED 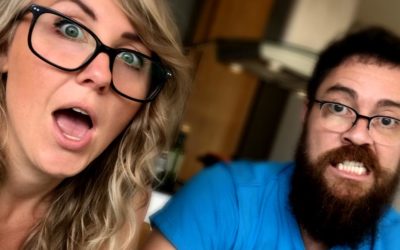 Adulting… A Crucial Piece Of The Entrepreneur Pie

When it comes down to it, no one really likes adulting… BUT you can learn how to make it fun by...